Let us show you how we can help you win at what matters most to you!

Jim is a graduate of Washington State University, holds an M.B.A. from Pepperdine University in Organization Leadership and an Advanced Management Certificate from Stanford University.

Jim was named V.P. of Sales for a $500MM distribution company at the age of 29 and became the youngest Group Vice President in the 120 year history of International Paper Company.

As Group Vice President at xpedx, Jim lead a $1BB distribution business with 21 locations in the Western U.S. and serving customers around the globe with packaging, custom packaging design, facility supplies, and printing papers. If you have touched an iPad or iPhone you touched work Jim’s team pioneered.

Jim has authored three books including “How to Win the Achievement Game”, 14 Strategies for Breakthrough Performances and his latest book “Tape Breakers, Maximize Your Impact with People You Love, Teams You Lead and Causes that Stir Your Heart”.

Tape Breakers debuted as the #1 New Release on Amazon in March 2016 and was recognized as a “2016 Book of the Year” along side the best selling new releases from Adam Grant, Ryan Holiday and Jake Knapp.

Jim met a lifetime goal to retire before the age of 55. He now focuses on helping helping people and organzations clarify and win at what matters most.

Jim met his wife Kristi at Washington State University. They have been married for 36 years and have two adult sons Matthew and Andrew that no longer require their credit card.

“I learned more about being a leader of people from Jim Akers in the last year than the last 20 years combined."

As the co-owner of Mercedes-Benz of The Woodlands, Bob led one of most successful dealership launches in Mercedes-Benz history. A success built upon Bob's knowledge of building customer-centric, culture-driven, and performance driven teams combined with his industry recognized expertise for turning around underperforming operations.

Bob holds a B.S. in Business Administration, an M.B.A. and has invested two years towards his PhD in Organizational Development and Executive Leadership.

A former nominee for the Ernst & Young Entrepreneur of the Year, Bob teaches Entrepreneurial Leadership as an Adjunct Professor at Lone Star College.

Bob is a decorated veteran, serving seven years in the U.S.A.F., and he and his wife are active community and philanthropic leader serving in leadership and board capacities with:

Bob and his wife Teresa, live in The Woodlands along with their 5 rescue dogs. They have 4 children and 2 grandchildren.

Bob Milner is one of the greatest examples of a servant leader I know. His service to our community is talked about and felt by many; his actions speak so loud, he never has to say much at all. 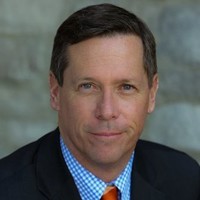 A graduate of Furman University with a Bachelor of Arts in Business, Sports Management.

Jim played golf at Furman and has competed nationally at the highest amateur levels.

Jim has built a distinguished management and sales career with representing and managing great customer experiences with a variety of great brands—FootJoy, Decente, Bushnell, Greg Norman and Under Armor.

Jim serves as the a Clarity to Win partner and its Chief Operating Officer.